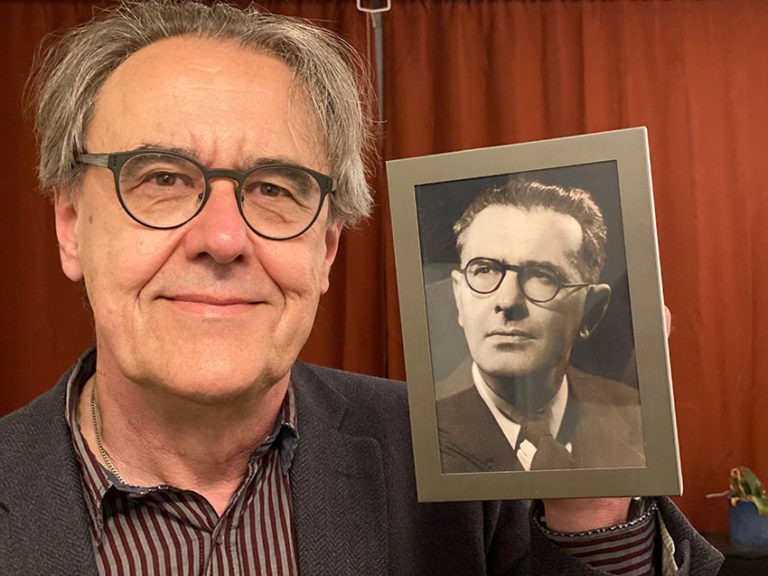 Barry Stevens is a a Toronto-based writer and filmmaker whose documentary films Offspring and Bio-Dad tell the story of his search for his biological father. His latest project, The World’s Biggest Family, debuts on CBC Docs POV at 8pm on Thursday, October 1st.

What’s your story in a nutshell? (When did you discover you are donor conceived? How did you identify your bio dad? How many siblings have you met?)
Our mother told my sister and me that we were conceived by artificial insemination from the sperm of an anonymous man shortly after our father had died in an accident. Decades later, the internet and DNA testing made it conceivable we could find out more. I searched for years — eventually identifying the ‘donor’ who had died years before, using DNA from his natural son. The ‘donor’ had about 600 offspring. I know 43. Including kids and grandkids, the clan numbers about 140-something. This is between 5-10% of the total, most of whom do not know.

What has it meant to you personally to solve this mystery and connect with new family members?
It was fun to solve the mystery, and helped me understand both myself and my father (the man who raised me) better. The new big family is a real pleasure but it takes a lot of time because we all are very chatty.

The World’s Biggest Family is your third documentary exploring donor conceived issues. Would you say the attitudes of lawmakers/government, ART industry professionals, and the general public has evolved or changed since the first film?
What I find frustrating is that government in my country, Canada, and the USA is absolutely out of date and does not recognize that it is simply wrong for people to withhold significant personal information about a citizen from that citizen. And many doctors of course are just focused on their baby-making business. Likewise, the sperm banks. I think, though, that the public is ahead of the powerful on this issue.

Lesbian and gay couples and single mothers by choice have brought sperm and egg ‘donation’ into the light, because there is no point being secret in those cases. DNA testing makes a mockery of anonymity in the future, and the sperm banks are starting to recognize this. But it is awful and so obviously wrong that the FDA in the States and Health Canada refuse to alter their policies and regulate the industry and demand that offspring have the right to this crucial information about themselves.

Your siblings shared a wide array of thoughtful comments about the ethical problems created by an anonymous system. What are some of their insights that resonate with you the most?
“Everybody has the right to this information” — and that understanding who you come from genetically is a big help and offers big insights. That family health information is very important, especially as one gets older. That for many the discovery late in life that one’s story, the story one’s parents told you, was false. Everyone needs a story, and it should be a true story.

How would you describe the response of the Canadian government and lawmakers to the issues created by the current system? Do you think there is significant political will to create a more equitable system for donor conceived people? (From my perspective, they seem willfully blind.)
I would agree. Willfully blind… or just kind of out of it, acting in a big, slow-moving, very cautious (I would say cowardly) bureaucracy. In 2004, we persuaded the Parliamentary Committee to make the system non-anonymous. The Health Minister and PM parachuted Dr Hedy Fry and another physician MP, Carolyn Bennett, onto the Committee and pushed them to rescind this move, which would have pre-dated the UK’s opening of their system.

Later, the Supreme Court struck down much of the law anyway.  I think the Canadian government regards creating a registry and mandating openness as displeasing doctors and the fertility business, and threatening a major constituency, LGBTQ folks. Of course, the former is changing and the latter isn’t true, except in the case of a few ideologically driven people. It was, after all, a Lesbian-run sperm bank in California which originated the practice of the ‘donor’s’ identity being knowable to the offspring. A lot of the problem is just inertia.

The World’s Biggest Family airs on CBC Docs POV at 8pm on Thursday, October 1st and CBC Gem. Read more about the film and watch the trailer here.