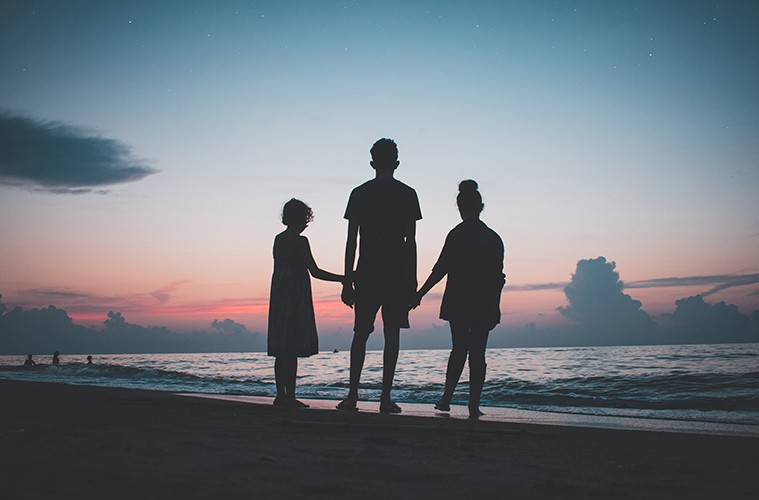 “Do you have any siblings?.” I’ve been asked that question so many times that I developed an automatic response: “No, I’m an only child.” Even when asked now, sometimes I’ll cut myself off in the middle of answering, reminding myself of my new reality.

“Actually, I do, but it’s kind of a long story. Wanna hear about it?”

As early as I can remember, my parents have been honest about our family dynamic. I have two moms. Because they couldn’t conceive a child through traditional means, they sought open-ID donor sperm from a cryobank nearly twenty years ago. I grew up without a father figure, and without knowing where half of my genetic identity came from. Despite this, I never pressed for details. What if this man—this stranger—rejected me? I convinced myself it would be easier not to dwell on the topic, even when sparks of curiosity popped up throughout my childhood.

In the fall of 2017, my biological mother decided to buy us both AncestryDNA tests. I was fascinated to learn more about my ethnicity estimate. I was not aware of the DNA matching feature, but my mother was—and she had a pretty good idea what I might find.

Immediately after receiving the results, my mother showed me a message from one of my DNA matches. It was the mother of one of my half-siblings, explaining their family situation—including the fact that I had half siblings.

In one moment, I went from being an only child to someone with 27 siblings.

It took a few weeks for me to process. I didn’t realize what information could come from a DNA test and wasn’t prepared for such a big change. I brushed off the results at first, nonchalantly telling my mother I wasn’t interested. Truthfully I was, but I didn’t know how to express that to her.

As my curiosity continued to grow, I eventually reached out to the mother who sent my mom and me that initial message and asked for more information. She gave me the contact information of a sister—her name was Taylor, 19 years old, and she lived in New York. As I learned more and more about some of them, I recall looking them up on Facebook and being shocked at the resemblance. I could see my chin. My jawline. My smile. I had also been told that the eldest of our group, Heather, 23, lived one town over from me. The same county, no more than a 30 minute drive away. I almost couldn’t believe it. After exchanging some messages, we made plans to meet at a local cafe.

Meeting her was awkward, and strange, yet I couldn’t shake a feeling of familiarity. I didn’t have any expectations from what would come from meeting her, and I certainly didn’t imagine I could relate to her at all. But, after she left, I walked over to a friend’s house and collapsed to the floor in tears. After spending the first 18 years of my life focusing on why I felt so different, I could finally see myself in someone. Nothing could have prepared me for that.

Eventually, we formed a group chat. In the beginning, there were only around 13 of us interested in it, but plenty of baby pictures, poll questions, and heartfelt messages were exchanged. It didn’t take long for us to need google docs to keep track of everyone. We all understood that because our donor had been to six different cryobanks throughout the 90s, there would surely be more of “us” at some point—but I don’t think any of us could have predicted just how many there could be.

As time went by, more and more siblings began appearing, eager to form connections. Either from taking a DNA test, posting on an online registry, or through contacting a cryobank directly who connected them to our donor and eventually to us. One year after I took my DNA test, our group’s number was at 42. Another year later, as of November 2019, we hit 50.

Unlike our group size, one aspect that has remained constant is our donor’s attitude. When I heard that he was friends with my siblings on Facebook, I thought to myself, “Really? That’s it? It’s just that… simple?” I don’t think I realized at first how lucky I was to have him be so receptive to contact. He’s kind, intelligent, and supportive—all things a philosophy professor should be. Even as our numbers have risen, he’s never once hesitated in answering any questions I’ve had for him. I eventually realized that he gets just as much out of knowing us as we do from knowing him.

Many of my siblings are in different stages and have been raised so far away from one another. Having social media accounts help us stay connected, but it doesn’t make it easy. Even with the existence of our giant (albeit sometimes intimidating) group chat, I think a lot of us struggle with what to say, or how to initiate conversation (usually I end up embarrassing myself). We toil with trying to understand how we’re supposed to form individual, meaningful relationships with everyone, but at some point, an inevitable reality hits that it just isn’t possible.

But that doesn’t mean we shouldn’t try. It doesn’t mean that we can’t care about each other, that we can’t actively let each other know about what’s happening in our lives. A common curiosity, a thirst for knowledge about ourselves and our DNA, has brought us all together. 50 percent of our DNA comes from the same person—the same man. There are bound to be similarities, both seen and unseen, that matter.

Maybe things would have been easier if there weren’t so many of us, but I have learned that love is not divided, it is multiplied. So regardless of if there are 10, 20, or 100 more of “us” out there, I will continue to welcome them into my life without hesitation, and my curiosity to form connections will persist. I know just how much good can come from these connections, and I know just how much good they’ve done for me.

But sure, having a lot of siblings is a pretty interesting dynamic. We may not have all been raised together, but we’re bound together from our genes, for better or for worse. For instance, a lot of us have a love of all things sweet! Slightly unhealthy coffee and pasta addictions also run in the family (No seriously, our donor put “pasta” as his favorite food on one of his donor profiles.) Defined cleft chins, dimples, high cheekbones, blue eyes, and blonde hair are the dominant physical traits that run through our group. If had to pick ONE trait that I truly feel everyone shares, it would be our mellow nature.

Many of us are still strangers to one another, but we’re all tied together by something pretty special: the ability to see ourselves in each other, and a desire to understand that innate connection.

Sometimes, it’s hard to reflect on my life before taking that DNA test. Part of me feels like I was in a hazed state, drifting with the wrong priorities and no philosophy of my own. I was a good student, a good friend, and I had aspirations—but I felt lonely.

When I was a kid, I thought having a sibling would make me feel normal. I struggled to make friends and remember begging my mom for a younger brother so I wouldn’t have to be an only child. In just two years, I went from zero siblings to 49 brothers and sisters. In many ways, I’m still learning what having a sibling means, but meeting them has made me feel more normal than ever.

Top photo by Kylo on Unsplash