We Are Donor Conceived Survey Results

We Are Donor Conceived Survey Results

The purpose of the We Are Donor Conceived survey was to gain insight into the thoughts, feelings, and experiences of donor conceived people. The survey was open to responses between November 14, 2016 and January 8, 2017. It was shared on several donor conceived Facebook groups and visible on wearedonorconceived.com.

The survey captured 82 responses from donor conceived persons around the world. The breakdown is as follows: USA (35), Australia (13), UK (9), Canada (9), Denmark (5), Belgium (2), New Zealand (2), The Netherlands (2), Czech Republic (1), Japan (1), Luxembourg (1), Norway (1), Sweden (1). The majority of respondents (84%) were female. Most respondents (82%) indicated they were raised by heterosexual parents. Though the survey was open to individuals conceived via donor egg, sperm, or both, 81 out of 82 respondents were conceived via donor sperm.

Respondents were born between 1954 and 2000. The bulk (42%) were born in the 1980s. The following graph illustrates when participants were born, organized by decade: Age of disclosure varied from early childhood to age 61. 22% of respondents indicated they were five-years-old (or younger) when they discovered they were donor conceived, while 39% found out in adolescence or their 20s. The survey was mainly comprised of multiple choice questions. The two open-ended questions asked respondents to indicate how they felt when they first discovered they are donor conceived and how they feel now. Here are some of the responses:

Q: When you first found out you are donor conceived, how did you feel?

“As a child, it was just a fact, nothing more.”

“I did not know how to feel. At 5 years old I could not articulate what it meant to be donor conceived. I honestly didn’t feel any different.”

“I felt shocked and hurt. I also felt very sad because my mother told me I wasn’t allowed to ever speak of it or tell anyone and that I could never find out the identity of my father or half-siblings.”

“I lost my identity. I didn’t know who I was anymore and I lost trust in my parents.”

To give an overall sense of the responses, this word cloud was generated. The size of the text corresponds to the frequency each word was used across all of the responses: 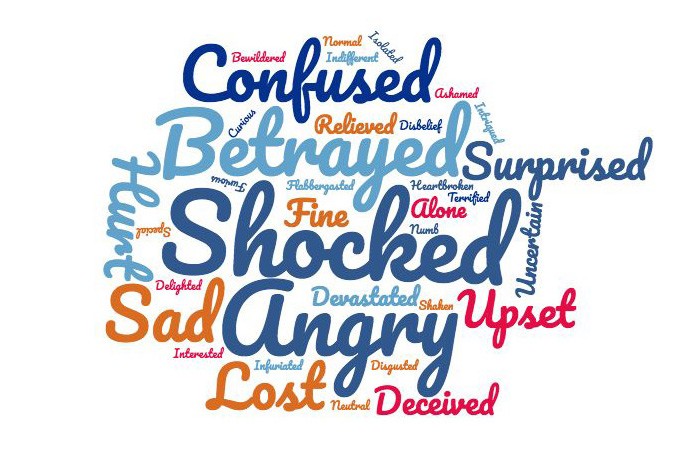 Participants were also asked how they feel presently. Regardless of the age they were informed about their conception, respondents expressed a wide variety of different emotions, ranging from acceptance to anger. Here is a selection of responses:

“It’s a mixed bag. On the one hand, I’m grateful because I wouldn’t BE here without the donor but then again I’m also angry that I’m not able to know more about half of my genetic identity.”

“I’m fine with being donor conceived, I just don’t like the anonymity.”

“I still feel that a large part of me is a mystery, one that I should always have been entitled to know. Regardless, my Dad is still my Dad, but I also have a strong desire to know and connect with my hidden family.”

Results from the We Are Donor Conceived survey indicate strong consensus among the worldwide community of donor conceived individuals surrounding issues like the use of anonymous sperm/egg donors, the need to impose limits on how many offspring a single donor can produce, and concerns about not having access to an accurate family health history. Below is an overview of some highlights, followed by the full results.

Honesty is the best policy. 95% of respondents believe it is wrong for parents of donor conceived children to keep their child’s method of conception a secret from their child.

Donor conceived people do not support anonymous sperm donation. Survey results indicate that 86% of respondents do not support the use of anonymous donor eggs or sperm to conceive a child. Respondents were also strongly in favor of a set limit on how many offspring a single donor can produce. When asked how many offspring would be appropriate, the majority selected “fewer than five”. The survey also reveals that 91% of respondents believe sperm banks/clinics do not adequately understand or respect the emotional needs of donor conceived people.

Scroll down for the full report.

We Are Donor Conceived 2019 Survey Results