We Are Donor Conceived 2018 Survey Results

The purpose of the 2018 We Are Donor Conceived survey was to gain meaningful insight into the thoughts, feelings, and experiences of donor-conceived adults— i.e. individuals conceived via sperm and/or egg donation.

A total of 127 donor-conceived people born between 1958 and 2003 participated in the survey. The majority of respondents (69%) were born in the 1980s or 1990s. Respondents were from 11 different countries, including Australia, New Zealand, the UK, France Belgium, Germany, Spain, the Netherlands, and Iceland. The majority were from the United States (94) and Canada (11).

Learning about being donor-conceived

The majority of survey respondents (63%) learned about the nature of their conception from their parents, either as a child (26%), teenager (12%), or adult (25%). Just over one-quarter of respondents (26%) discovered this information from a DNA test. 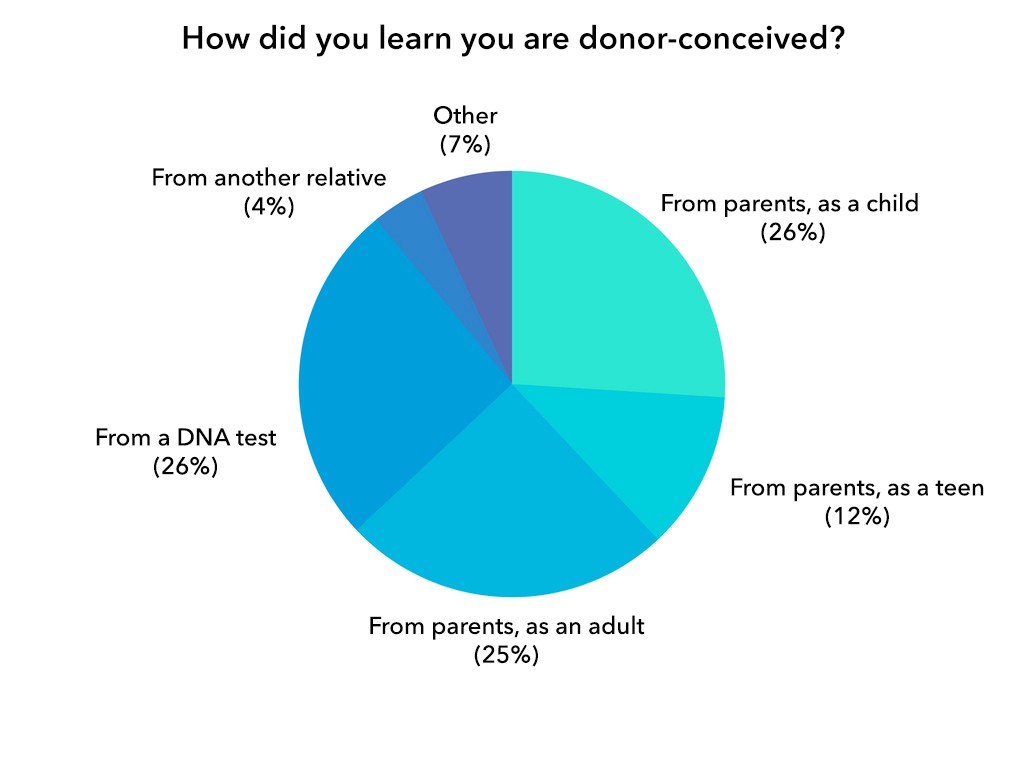 Previous research suggests a shift in attitudes towards early disclosure in the 1990s, as more single women and lesbian couples began accessing anonymous sperm donation to conceive a child. Results of the 2018 survey bear this information out. Nearly half of respondents (49%) born after 1990 discovered they are donor-conceived from their parents, as a child, whereas only 19% of those born before 1990 found out the truth this way. 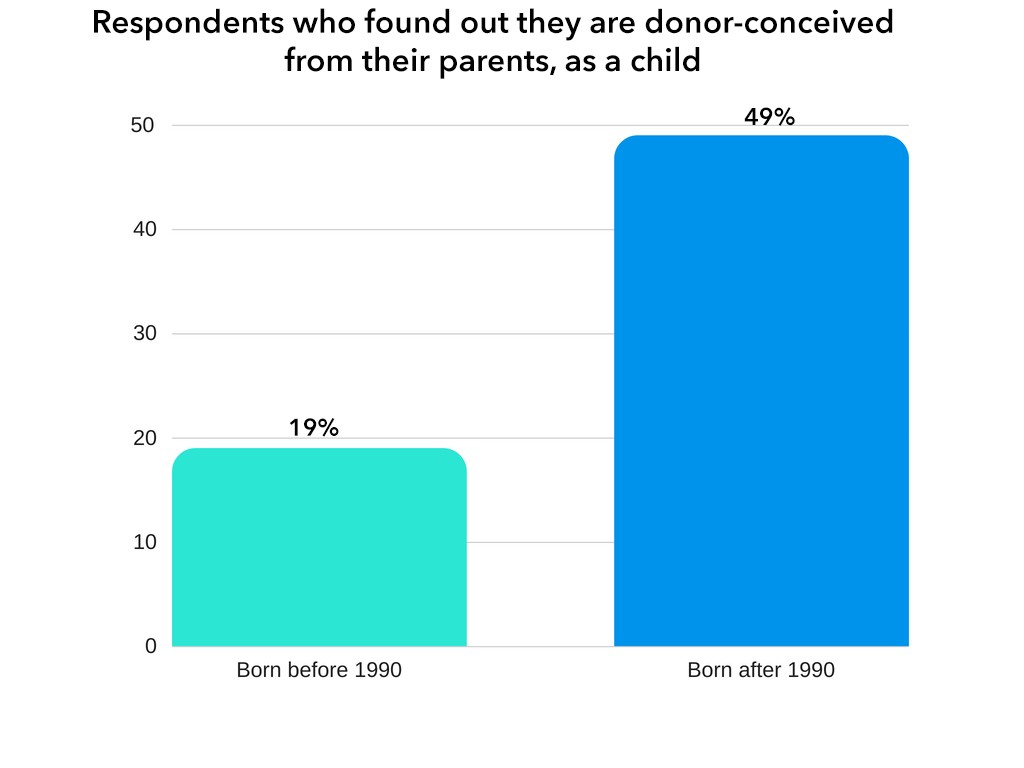 A similar disparity is evident among survey respondents who learned they are donor-conceived from a DNA test. Respondents born before 1990 were more likely than those born after 1990 to have learned the truth about their conception this way (33% vs 9%). 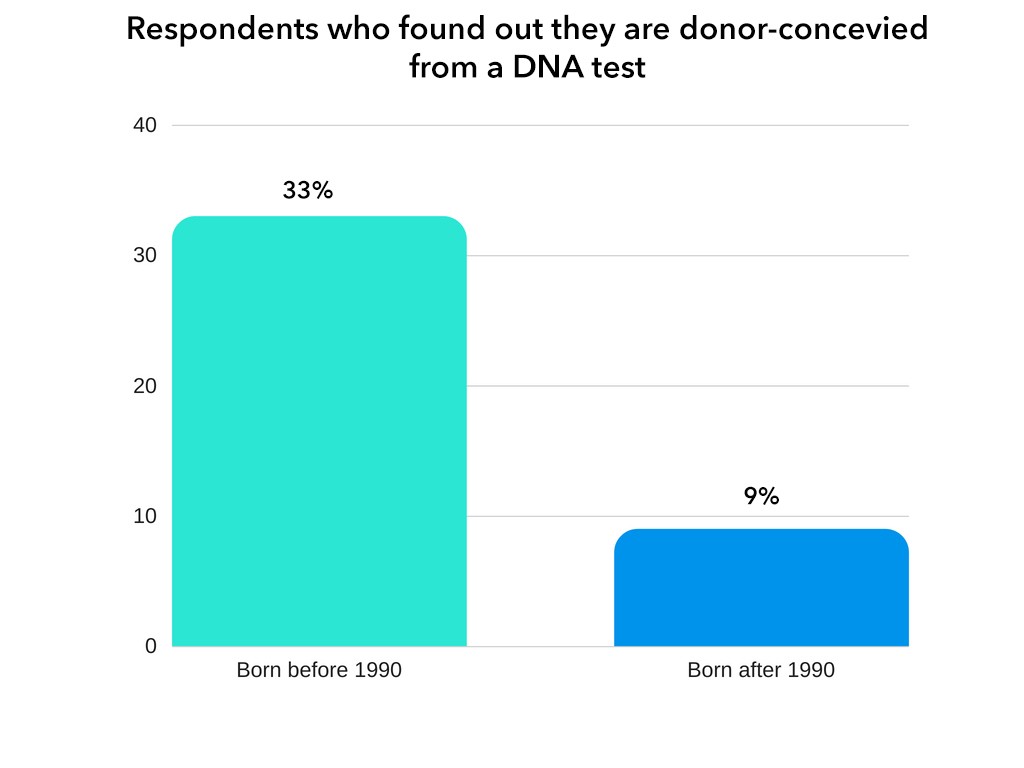 DNA testing kits aren’t just revealing the truth about individuals conceived via sperm and egg donation; survey results indicate these kits are also a popular tool for donor-conceived individuals looking to learn more about their origins.

Ninety-one percent of survey participants said they have taken a DNA test. The most commonly cited reason for taking a DNA test among participants who found out about being donor-conceived from their parents was to find family members, i.e. their donor or donor siblings, (cited by 93% of respondents), followed by ancestry information (cited by 79%), and health information (56%). 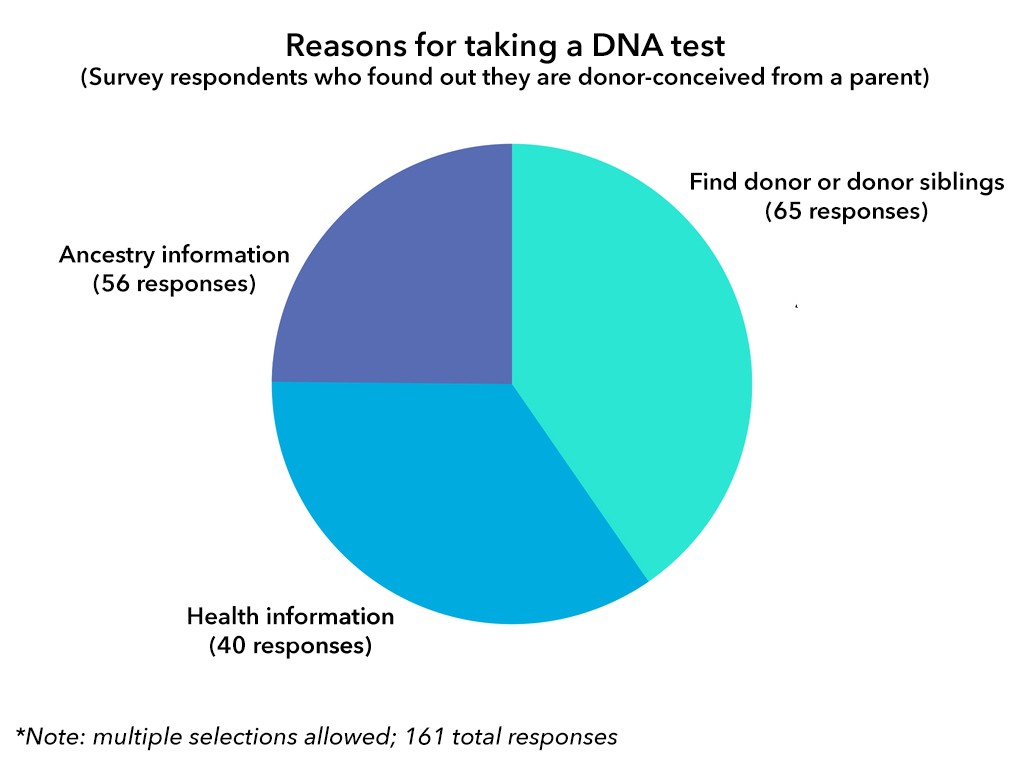 Participants were invited to share their feelings on being a donor-conceived adult. Short answers to this question commonly included words like overwhelmed, intrigued, weary, angry, confused, frustrated, resentful, and fine.

Below is a sampling of some of the longer responses.

Q: How do you feel about being donor-conceived today?

“Conceptualizing the donor-conceived experience is a spectrum of emotions. I’ve gone through periods of intense anger, depression and apathy. Since identifying my biological father my emotions have leveled off a bit, but I am still frustrated at the loss of that relationship and the value our society places on the right to know one’s genetic identity.”
-Male born 1986, found out from parents as a child

“I do not like donor conception because, for many years, how I was created kept me from having access to identity information, health information, and family.”
-Female born 1983, found out from parents as a child

“Now, I feel it is a huge part of my identity. I recently reached out to my biological father. So far, the experience has been pleasant, but I have felt a lot of anger, shame, and grief…I also feel like I was rejected. My donor father wanted children, but he didn’t want to raise them or know them until they were 18. It’s incredibly shameful and confusing and I don’t feel like I can relate to anyone.”
-Female born 1997, found out from parents as a child

“It’s an interesting space to live in. On the one hand, I appreciate that my parents wanted a child so much that they went through the things they did in order to conceive me, but I’m also annoyed that I don’t have answers about my origins. I hate the anonymity and I wonder about the donor. I don’t see him as my father, but I wonder if he realizes the ramifications of his actions.”
-Female born 1991, found out from parents as a teen

“Glad to have more understanding to a piece that was missing my whole life, but I’ve lost trust in my parents I don’t know I will regain. It’s also changed my view of the fertility industry.”
-Female born 1987, found out from a DNA test

“I forgave my parents and I still consider myself to be the son of my social father. Nothing with him will ever change. But secretly I am longing to know who my biological father and all siblings are. I desperately want to learn about my own unknown origins.”
-Male born 1985, found out from a DNA test

Interestingly, many donor-conceived people expressed similar emotions and had similar experiences regardless of when or how they found out about the nature of their conception. The common factor among those who feel positively about being donor-conceived is that they have met their biological father/donor and connected with donor siblings, as evidenced in these responses:

“I recently found nine siblings and my donor. I feel grateful and overwhelmed. I’m happy my moms had the opportunity to have me using a donor.”
-Female born 1996, found out from parents as a child

“I’m ok. However since finding my biological family over the past nine months I’m happier that I have ever been, no longer feel alone, and have healed in ways I didn’t know I needed healing.”
-Female born 1969, found out as a teen

“I feel so glad that I was conceived this way. The DNA was better than I could have gotten from my original dad, and now I have such a large, amazing family that I feel like I fit right in with.”
-Female born 1991, found out from a DNA test

“I’m comfortable only because I found my biological father, and he has welcomed me into his life. Prior to that, I felt vaguely depressed.”
-Female born 1980, found out from a DNA test

Perceptions of the “Donor”

For the sake of brevity, this report primarily uses the word “donor” to denote the person who provided half of a donor-conceived person’s DNA. Donor-conceived individuals use a variety of terms to describe this person in relation to themselves, including biological father (cited by 56% of respondents), and sperm donor or donor (cited by 54%). Other terms used include donor father (19%), and father (15%). 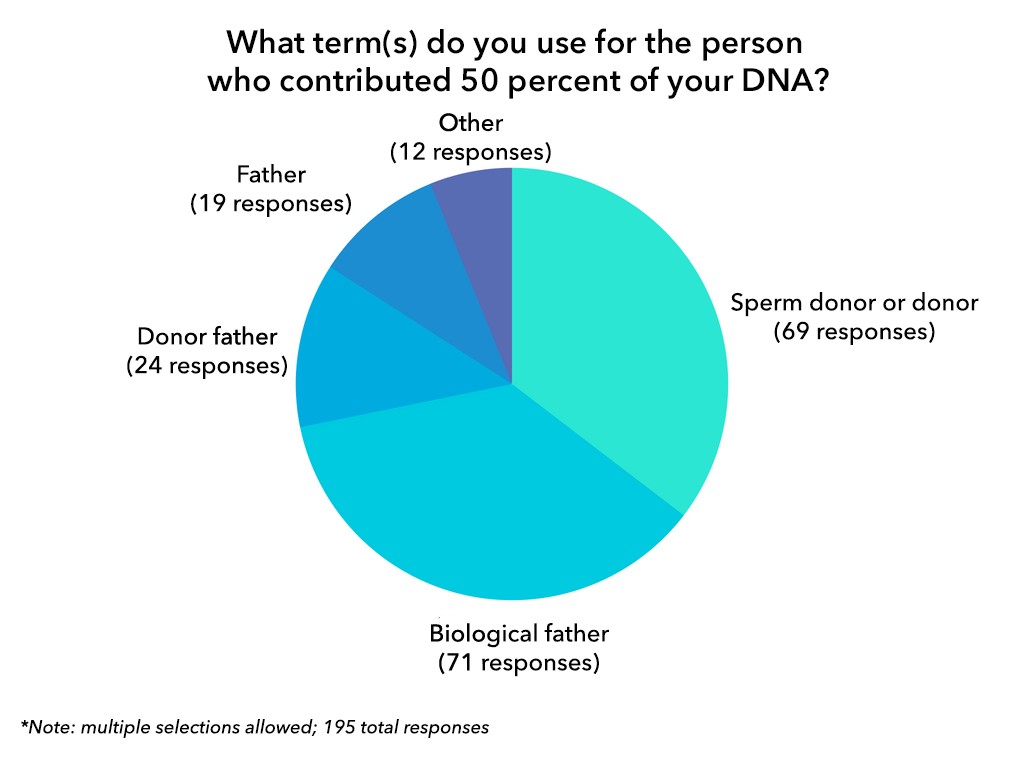 Among those who selected “other”, commonly cited terms include bio dad, dad, and “his name.” Taken as a whole, the terms that contain the word “father” or “dad” in some form outnumber “sperm donor or donor” (119 vs. 69). Note: multiple selections were allowed for this question. Results also indicate that many respondents use two or more different terms.

Opinions about secrecy and anonymity

Almost all respondents (97%) believe it is wrong for parents of donor-conceived children to keep their child’s method of conception a secret from their child.

DNA testing has effectively ended donor anonymity. Results indicate that 57% of respondents have successfully identified their donor through DNA testing and 54% have discovered one or more half siblings this way.

The majority of respondents (59%) agreed with the statement “My donor is half of who I am” and 77% agreed that the fact that they are donor-conceived is a significant part of their identity.

Common concerns and curiosities among participants including wondering what personality traits, skills, and/or physical similarities they share with their donor (96%); wanting to know more about their ethnic background or family tree (86%); and worrying they do not have a complete and/or accurate family health history (84%).

The majority of respondents (59%) also indicated they are worried the mother and/or father who raised them would feel angry, hurt, or threatened if they expressed an interest in learning more about their donor.

Survey participants favor limiting the number of offspring a single donor can produce. When asked how many individuals would be appropriate, the highest ranked responses were “fewer than five” (48%) and “6-10” (42%).

There is also a strong consensus among respondents that sperm banks/clinics “do not adequately understand or respect the emotional needs of donor-conceived people.” Ninety-one percent of respondents agreed with this statement.